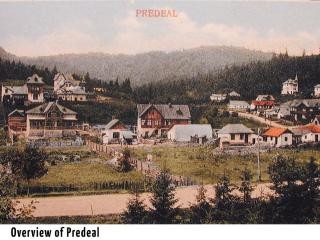 The name of the settlement has sparked more interest for exegetes, most remaining to the conclusion that it is a Latin name, translating the Latin term "Pre Deal" by "higher than the hill", "in front of the hill 'or' estate addiction". As it is known, this troponin towns are numerous: "Predeal" in Plaiul Teleajenului, "Simon" Bran and "Predelus" on the Bratocea area.

We know that Predeal is mentioned in 1368, when the army led by Prince of Transylvania, Nicholas, passes in Muntenia through Predeal to resist Vladislav I (Vlaicu Voda). In fact, in June 1358, when Brasov receive from Ludovic I, the successor of Charles Robert rights "road Braila", "free and confident to pass the goods and all things" on the road "between Buzau and Prahova" this could only be by way Predeal. Subsequently, the rulers, said Radu Voda said „the Bald” (son of Mircea cel Batran) in 1421, Vladislav II in 1542, Vlad Tepes in 1476, to mention just a few, strengthen access to this road Brasov Brasov, what with certainly led to populate the area.

The Transylvanian Map "cosmography" by Johannes Honterus, published in 1532, places the country's customs on the Prahova Valley, confirming the existence of official road of the post chariots and the merchant caravans.

Documents of the eighteenth century mentions on the 1700 the inn from Gura Rasnoavei used by those who sought refuge in Transylvania. There is then "Carciuma de la Frontiera" from the current around railway stations and, in 1750, Hanul lui Ruja, in the north of Predeal, probably on the site where today Carmen hotel is found, the Inn of Gura Valley Puristoaca (Teascului Valley), which later became the home of a forester and later Bank Bear Inn, located in southern village, belonging later hermitage of Predeal.

During the reign of Constantin Brancoveanu, when customs function from Timis was working, the road and halt from Predeal were more populated, especially after Serban Cantacuzino builts the Monastery from Sinaia (1695).

After the Russo-Turkish-Austrian (1736-1739, ended with the Peace of Belgrade), the Austrians restore Predealului road, building wooden bridges for access to Bucharest

Memorable for these places remained the events of 1787 when Predeal area became the scene of war after, on 24 August, the Turks declared war on Russia and then on Austria.

The built of Ploiesti-Predeal road in 1846 contributed to popular, especially with border guards and customs officers, especially in the north area of the hermitage (founded in 1774). Secularization of the monasteries treasures in 1864 made a large part of the population (mostly from Breaza, Comarnic, Cornu, Tesila) to buy houses, recognizing their right to be owners, their houses and farmyards stretching to Joita Valley. 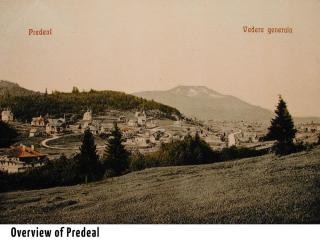 During the revolution of 1848, Predeal area is again the scene of strategic battles. Many revolutionaries fled to Metochion in Predeal, among them Varlaam Barancescu monk, who was part of Pantazi group's fighters (one of his collaborators Nicolae Balcescu). After General Baron Puchner, commander of Transylvania, asked marshal Lüders for help, the music troupes commander, found in Bucharest, Brasov and Sibiu to defend against the Hungarians, Predeal becomes again the theater of war. With 2,680 infantry soldiers, 430 Ulans, 190 Cossacks and eight guns, he starts from Bucharest to Brasov. Hermitage inhabitants of the houses occupied Predeal abusively, installing a "body of observation” here. Hearing that the Szecklers threatened Brasov, Russians leave to Brasov on 2, 3 and 4 of February 1849, where they find Austrian General Schurter with his troops and a body of Romans and Saxons guardists. Predeal now was about to repopulate with Brasov Romans, snatchy leaving home to escape towards Bucharest. On February20, in the foothills of Predeal, on a bitter cold, Engelhardt's Austrian troops arrive, and the next day the Russians. The quarantine at Timis customs heavy fighting are given between the Hungarian and Austrian brigade Null. The Hungarians burn the forest in Timis, forcing the Austrians to retreat to Predeal, where fighting continues. Austrian III Battalion led by Frontier Turchy and 2 companies were out of the Vladeta woods in Predeal. The conflict resulted in the loss of 186 soldiers from the Austrians’. There were looted over 100 houses. The Hungarian Colonel Alexander Kiss had occupied Predeal and the straits from Timis with 4,000 soldiers and more guns, waiting for the Russians here. In June 7/19 the first battle between the Russians and Hungarians starts, first on Predeal’s coast and then up in Predeal, where Colonel Ion Costin fell victim to, the commander of the Cossack regiment 1 (Romanian from Bessarabia).

Entered into the national circuit of interest, Predeal creates in 1870, in a place located at the crossroads of Joita road, the first post office, only 16 years after the postage stamps were introduced for franking the mail.

The events of the American Revolution met at Predeal a high visibility. Over 200 young people left on April 1, 1877 with other companies of the Dorobanti Regiment VII constituting a brigade under Colonel Sachelarie Otoni, also VIII Dorobanti company under the leadership of Captain Grigore Strambeanu, reaching Pelisor, participating in the Grivitei assault no1; then, in September 11/23 in Verbita, where he built with other bands fort "Alexander" and "Craiova". In the memorable day of November 28 / December 10, 1877, the company from Predeal is at the mouth of Vidin, entering from Plevna, where it heads to Rahova and Lom-Palanka, taking part in operations in western Bulgaria. On 30/11 January 1878, the company VIII Predeal (with the entire brigade Ipatescu II, Division 4) comes to Belgradejik to occupy the village of Tarnac, then finishes the strengthened position from January 12/24 Tatargik and came victorious in Vidin. After the Peace of San Stefano, he crossed the Danube on February 21, 1878 crowned the laurels back home. Among those present there was also Sergeant Dascalescu Peter, who gave Ioan G. Babes eyewitness information. Other people from Predeal were enrolled in the 2nd Hunting Battalion, among which Oaie Dumitru was awarded the "Military Virtue" and "Cross of St. George". From among the heroes, on whose breasts were waving embellishments as "Crossing the Danube", "Defenders of Independence", "Star of Romania", "Defenders of Independence", "Military Virtue gold", "Silver Military Virtue" Captain mention Strambeanu Sergeant major Andreescu, sergeants Francu Dumitru, Dascalu Petre, Popescu George, Bunghezu Ion, caporal Irimia Ion and soldier Iordache George. Of those who died on the battlefield we mention the lieutenant Florescu (Grivita) soldiers Petrascu Stavar (also from Grivita) Urloi Ion (Plevna), Nicholas N. Lica, Mihai Dumitru, Neagoe Vasile, Serb Banu, Gatej Dumitru, Stan George, Badila Ion, Todor Moise (on different battlefields).

Commissioning of the railway station Ploiesti-Predeal, in 1879, and the construction of the passenger stations from Predeal bring greater prestige. New allotment of 1881 leads to an increased number of households, especially populating the north of Predeal, to Malul Ursului, then towards Joita Valley and then the foothills of Clabucetul Taurului, Susaiului and Cioplei, carved with sunny slopes. On June 10, 1879 there appeared the first steam cars that circulated between Sinaia and Predeal.

Until 1864, Predeal was part of the village Podul Neagului, which included all the settlements on the Prahova Valley, with residence in Podul Neagului, near Comarnic until 1833 when it moved to Busteni. On this year Posada and Podul Neagului detached from the village and cling to Comarnic. In 1880, Sinaia, until 1874 called the "Black Bridge" also united with Posada, Comarnic, becomes a village. Predeal, Azuga, Busteni and Poiana Tapului detached from it and formed a single town under the name of Predeal, on May 7, 1885, covering the area of approx. 22 km up to Pelesului water from the top of Bucegi, to the water string of the corner and mountains of Doftana area. Consequently, on 7 May 1885, the new council is constituted and village Predeal, with residence in the City of Predeal, instead of the school in front of the monastery. The building is destroyed in the fire from January 20, 1889, which is why the City Hall is being offered hosting by the Fabrics factory in Azuga, starting April 21, 1889, and by 1892 all the capital village law is moved to Azuga Predeal, where it began building an own place, Carol offering a free part of the property, too.

In 1908, Predeal and Azuga detach from Busteni and Poiana Tapului so that, on 20 May 1912, to sign the birth certificate of Predeal autonomous village, receiving administrative independence for the 75 contributors. As a result, in the same year a popular bank is established, "Izvoarele Prahovei ". This year's census record 267 buildings (of which 75 villas). In 1913 it is also founded the Beauty Society of Predeal.

In terms of the First World War battle theatre again becomes Predeal, in these places is fierce confrontations unfold.