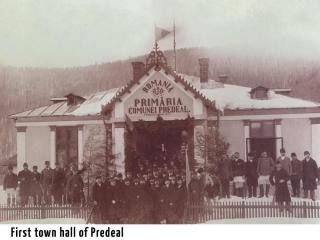 The historical traces of this settlement are as sporadic as distant in time. It cannot be denied that here there was an ancient prehistoric settlement, although they were made less archaeological works than in any other historical areas. The few excavations have confirmed the existence, at the end of the last century, in Predeal area, of a warehouse dating from the Neolithic bronze (1200-800 BC), composed of massive necklaces, beautifully crafted sword and an axe with cake and fritter mouth.

The absence of Roman archaeological traces supposes that the Roman legions scared by Posada pass, avoided the area, preferring Teleajen and the pitch from Tabla Butii in their transition to Transylvania. It is noted that, here, through the dust road that winds through Bucegi mountains, the soldiers of Mihai Viteazul (Michael the Brave) established in 1600, arrived in Predeal, in their glorious transition to Transylvania in order to enforce the people's aspiration for centuries – the unification of the three Romanian provinces: the Romanian Country, Transylvania and Moldova. The name of the settlement has sparked interest to several exegetes, most of them reaching the conclusion that it is a Latin name, translating the Latin term "Pre Deal" by "higher than the hill", "in front of the hill” or “real estate”.

We highlight three important moments in the evolution of the town

1912 – the year when it signed the birth certificate of Predeal village;

1992 – the year when the city is approved as a resort organization.