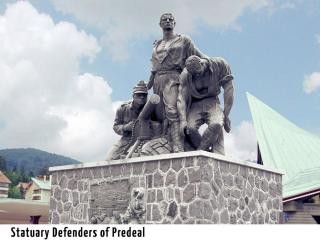 Near the modern building of the Romanian railways station it was located in 1995 , " The statuary group Defenders of Predeal " . It was moved in Central Park of Predeal and it was built in honor of heroes who died in the First Word War. On the façade, at the base of the pedestal is mounted a bronze princely which plays a battle scene. Back, on the station is fixed a plate of marble with red text:

"BUILT UP IN HONOR OF HEROES IN THE FIRST WORLD WAR PLACED BY LOCAL COUNCIL OF PREDEAL IN 1995". 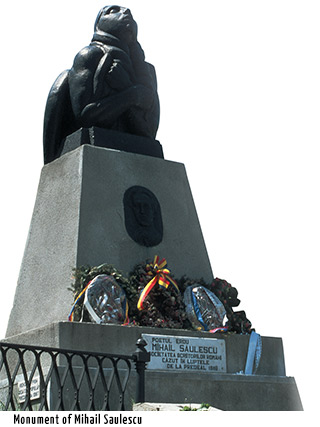 This monument is located at the entrance in Predeal, from Brasov side.The bust of the poet stands on a plinth of concrete massive mosaic in two steps. The bust, made of bronze and supported by a prismatic pedestal, it is the work of the sculptor Oscar Han.

Raised on the northern edge of Predeal, in the end of the first serpentine to DN1,on the places where they were have been given the first attacks in " the battle for Predeal " and where he fell hit the wing death the poet - soldier Michael Saulescu, the monument guards the entrance defended the town for nearly two weeks by soldiers martyrs of the War of the Whole.

Below the statue is mounted a plaque of bronze medallion with the image of the poet, and below, over a plate of white marble, are carved the words:

„THE HERO POET MIHAIL SAULESCU THE WRITERS SOCIETY DIED IN THE FIGHTS FROM PREDEAL”. 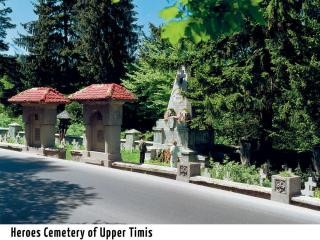 Climbing the coils of Timis de Sus of Predeal, you are having a historical quietude of austere images of crux without inscriptions situated in a soldierly column and it is impossible not to stop for relaxing and to ask yourself who are these men. They are the heros of people, who, on Predeal made sacrifices their life, bedabbled with their blood the earh of country, in the First World War. An obelisk, a protective wall realized rhomboidal and a simple inscription: ,,The Heros of People 1916,, oblige you to be here because hier important events arrived.

The cemetery of heros Valea Rasnoavei 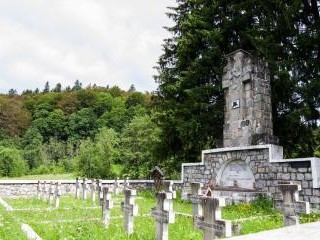 Coming out from Predeal to Azuga, before to pass over the bridge to Paraul Rece, on Valley of Rasnoavei, the touristic route (on Nationl Route 73A) give the possibility to know another cemetery of heros, where near some German military men, fallen on these places, died heros of our family/people, fallen in the fights from Predeal on 4-25 September 1916. Whem the enemy from the Valley Rasnoavei tried to arrive in the region of Predeal to faint the resistance of roman troupes, from the station Predeal and from Cioplea, during 20 days, the men, who are dead now here, frustrated their intentions. In the memory of victims, a great monument of stone was built; there, inside, were the inscription: ,,Here repose the military men fallen in the battles about Predeal 1916,,. Two statuettes carving are situated on the sides from the end of the cemetery. In the right there are the burial places of roman heros, and on the left of Austrians, of Hungarians and of Germans. Degraded of weather, the monument was built of the company ,, The cult of heros,, on 1938, 20 years after the end of the war. 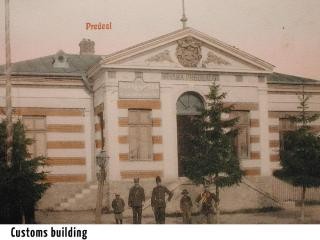 In the second half of the nineteenth century, the Custom-House has shifted from Breaza in Predeal and it worked here until the First World War. The building is located on the Boulevard. Mihail Saulescu, vis-à-vis the ambulance from the vicinity of the existing unit of firefighters.

Chronologically, the third monastic settlement in Bucegi area of is Metocul din Predeal, founded in 1774 by the monk Ioanichie. The hermitage stood at the foot of Clabucetul Taurului, then owned by Biv-vel logofat Crisoscolescu who also ruled over Piscul lui Cumpat, Dutca, Rasnoava, front and back of Cerbului, which he sells in 1821 to Mrs. Sakelarie. Also it is clear from the document that, in 1788 during the Russo-Turkish war, the hermitage was reduced to ashes, then abbot Ionisie rebuild both the hermitage and the cells, financially supported by Ioan Buzatu from Baciul-Sacelelor. The building, being made of wood, at only 30 years old is recovered from stone, starring as founder Ion Manole in 1819.

In 1917, the Monastery from Predeal formed a quadrangle of buildings opened to the east, with sides of 30 m in front and 50 m in the north-south. The entrance is through the gate, beneath the cells from the west, near the bell tower is found. The longest side is made up of the big church, built 90 years ago. The south side was made up of a number of cells that were bombed in 1916. In front of the entrance gate, at about 30 m, there is the stone church dedicated to St. Nicholas, built in 1819. The inscriptions on the tower in 1774 refer to the wooden church built by the monk Ioanichie, Turks burned in 1788, after which, as shown above, it was built another wooden church that withstood 30 years. 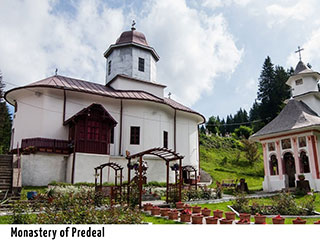 The raise of the stone church in 1819 was made - as the inscription proves - through the donations of many Christians, especially of Ioan Manole (owner of the inn from Malul Ursului) and Ioan Buzatu, both from Baciu-Sacele. It is built in the shape of a cross from Caraiman stone, with the length and the width of 5.10 m and a single entry door on the western side. In the entrance hall you enter a door opening having one side and another two openings, whose side walls are semi-cylindrical. In their own right, on the wall above, are painted Saint Nicholas Demetrios and George. In the entrance hall are also found painted and the 12 Apostles, having the image of our Lord Jesus Christ centre.

The entrance in narthex is made by a large wooden door, worked in boards, with flat ceiling, where the icon of Virgin Mary and the other saints’ lies are painted on the side walls. The narthex is separated from the nave by a wall with a thickness of 70 cm. The nave, with a length of 11 m and height of 3 m, has painted the vault of the Saviour face, lit by the four side windows. The altar is separated from the nave by an iconostasis made of 60 cm thick wall with two openings. The icons on the royal door, representing the archangel Gabriel, bears the inscription the year 1804 (unlike the others, it was brought here in 1916 nobody knows from where). Some of the icons of the temple disappeared in 1916 and were subsequently replaced by others brought from St. Mountain or Brasov (icon of St. Nicholas, in Cyrillic script bearing the mention "Caminariul Dumitru Belu chancellor, the son of the great chancellor Stefan and of Elena Belu”. The big church, which serves today, is built between 1833-1836 and has the same features as the church St. Nicholas. It has an exterior length of 22 m, width 18 m and height of 7 m, the nave being provided with a cupola. Along with Safta Castrisoaie in Bucharest (by others Sevastia Bujoreanu of Campina, who became a monk), considered the founder mainly contributed to the construction of the church many believers, recalling Boureanu and Maria Druganescu Gregory, daughter of the late Belu Logofat. Since 1919 Predeal monastery complex (the hermitage and two churches) are historical monuments. Until 09/01/1926 the religious services for local people who gathered around the monastery and made the city today steered monastery by monks priests. From this time the parish was founded Predeal, in order to establish religious unity of the believers from here.

In the years 1933-1935 two bodies of cells were built in the monastery and the painting was washed out at the request of Abbot Antonie Naescu. In 1938 there were here only seven monks, dealing with household monastery and church services. On 21 September 1940, here were reburied a part of 253 legionnaires killed on the night of 21/22 September 1939 in the camps and the country by order of King Charles II and the General Argesanu. By the labour Archimandrite Valeriu Niculaiasa they were made repairs and design of the construction. In 1942 the Commission of the Historical Monuments decided to increase the amounts allocated for the restoration of the old church.

On 30/01/1949 it is the last trimming of the monachism of Justinian – the monk in Bran village. In 1958 the communist regime abolished the monastery but there were made substantial restoration works to preserve the historical monuments. Between 1960 to 1961 the painter Joseph Vasu painted the church in fresco. In 1974, for the celebration of 200 years of existence, there were executed general repairs to the churches, bell tower and cells. In 1976 it was restored the painting from the church of St. Nicholas, the entrance under the new bell is decorated with paintings and burial chamber of the entrance corridor and it is painted also by the same artist who painted the church Nasterea Maicii Domnului. 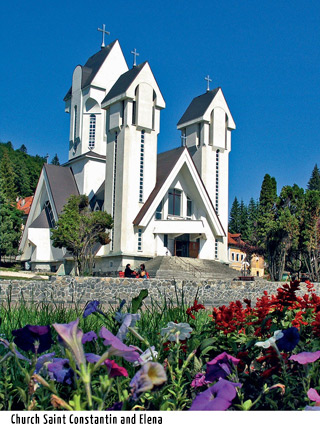 Orthodox church dedicated to "St. Constantine and Elena" in downtown, a location that really gives it the quality of the "heart of Predeal." Its construction began in 1990 under Pastoria of priest Ioan Herda, continuing from 1993 to present in Pastoria of the priest Lucian Vitan. It is designed in a mountain style, new classical church architecture, imposing and representative of the entire Prahova Valley. 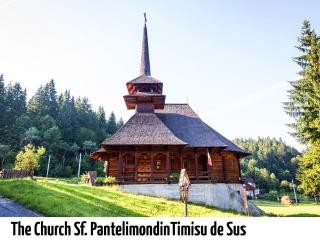 The church "St. Pantelimon" in Timisu de Sus, a wooden jewellery serves the orthodox believers from this area.

Monastery "Congregation Jesu" (Congregation of Jesus) from Timisul de Sus, a Roman Catholic monastery whose patron is "St. Theresa of the Child Jesus ". The Superior forum of the Congregation is the General Nun, in Rome. 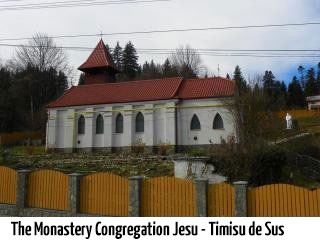 Currently, the monastery has 8 nuns, Sister Luiza Tutuianu and the priest is John Herman. The church "Saint Teresa of the Infant Jesus" service officiates at celebrations and religious service held in the chapel every day.