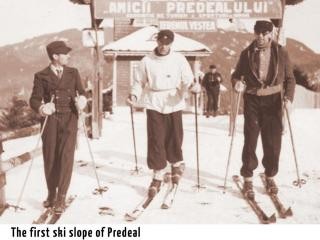 When talking about Romanian skiing, you necessarily think about Predeal.

On the Romanian sports map, Predeal enrol in ski data and facts as its relief allows it, that is at the highest point of the Romanian Ski. The resort is a swing and promoter of this sport.

Skiing has, over time, and continues to have a positive influence on the resort’s development. Skiers from Predeal are today’s heirs of a beautiful tradition that has lasted for decades.

Skiing in different forms across Predeal resort town has existed more than 110 years, as following:

- the applied military skiing is well represented (the Commandment of the 4th Mountain Regime, Colonel Gregoriou, is also the mayor of Predeal). - in the interwar period, the royal family was present at the ski slopes from Predeal, helping with the trophies and money in organizing various competitions.